My friend/housemate Holly (Below) got two tickets to see director Chris Cunningham live as a Birthday present from her parents, so  knowing I was also a  massive fan she asked me to come along. 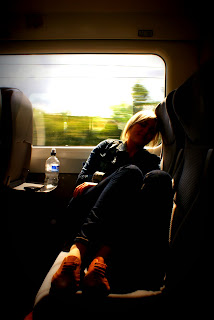 After a grueling train journey from Edinburgh to London we were in London town and ready to be inspired.
We decided to take as many galleries and exhibitions in as we could in the short time we had in between going to Chris Cunningham.

Below is my favorite Video directed by Cunningham, for the band Portishead and the on the night of the show at The Camden Roundhouse the atmosphere felt as thick as the air in this Video.

Chris Cunningham is known for the shock factor.... after all who remembers normal?
Below is my Video taken at the Camden Roundhouse...the atmosphere was unbelievable and has to be the most intense experience I have ever had.
The Speakers that were used vibrated our clothing and you can understand how loud it was through the distortion in the video I took with my iphone!

Such an inspiring inspiring director, his use of the human emotions is just fantastic!
Chris Cunningham is probably best known for his music videos for Aphex Twin and Bjork.