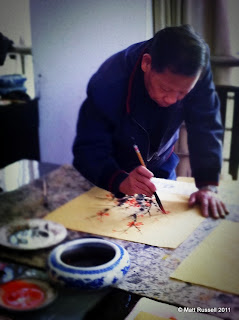 Above is a photograph I took of our Chinese Painting teacher at Nanjing University.
During my time spent in China we had various lessons, most frequenty was our Chinese language classes which took place every day, from starting as early as 8am.
Along with this we had culture classes where we undertook painting classes where we were taught the traditional way of Chinese painting.
During my time at Art School in the UK I have had lots of painting classes, however this was completely different as Art in Asia is so different to that of Europe's. 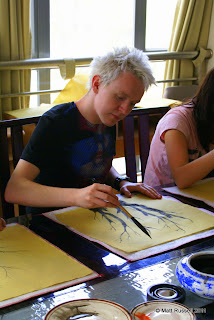 We learned that Chinese art in particular is so different to that of the west because artists in China are seen in a completely different light. Historically Art in China was not usually  created by "artists" as such but the art that was produced was usually created by philosophers or Poets that were respected at the time, often therefore a painting would be used to create a feeling towards a particular poem instead of being a visual representation of something which was originally the case in the west. 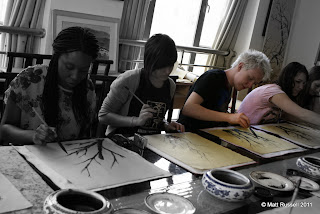 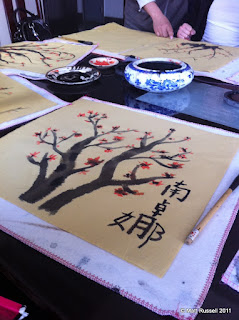 This means that chinese paintings are very often not lifelike, or directly a representation of something in paticular, making each artwork into an abstract metaphor.
Saying this however is making it seem as though their painting has developed in order to create this metaphoric representation, however the art of China has not changed very much in the past 2000+ years that its been around. 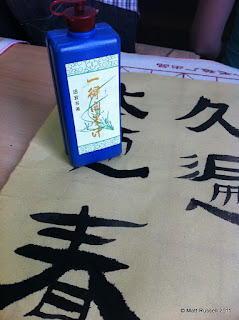 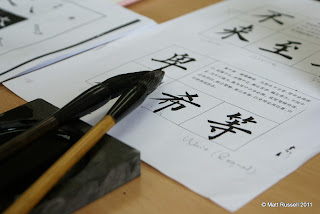 Why has it not developed like the art of the West? Well in my experience with the chinese they found it difficult to understand the purpose or prospects in Art, they are after-all still a developing country trying to feed themselves. 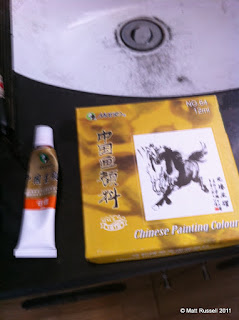 Art seems to the Chinese luxury not necessity, however with the economic climbing China does every day - becoming closer and closer to being the economic center of the world they become closer to their World of Art taking off.
With the wonders and masterpieces I saw in Chinese traditional art such as "Chinese paper cutting" and the wonderfull embrodery they have behind them, I can only dream at the moment for the wonders that the Art of China in the future will bring. 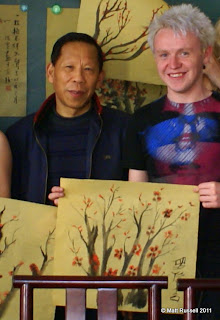 Me (Matt Russell) with my Chinese painting teacher holding my first -poor- attempt at Blossom tree's.
Posted by arty_matt at 07:52