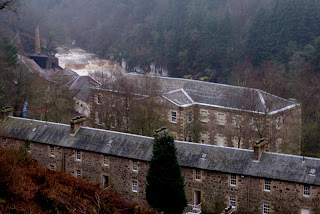 I visited the New Lanark  Mills as research for my weaving project, I wanted to discover the production of the weave from the creation of the cotton right up the the manufacture of the woven material.
New Lanark is not far from the small town I am originally from so I thought I would make the most of my visit down from Aberdeen.
New lanark was founded in 1786 by David Dale, who built cotton mills and housing for the mill workers. Dale built the mills there to takIe advantage of the water power provided by the river. Under the ownership of a partnership that included Dale's son-in-law, Robert Owen, a Welsh philanthropist and social reformer, New Lanark became a successful business and an epitome of utopian socialism. 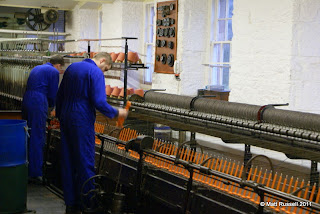 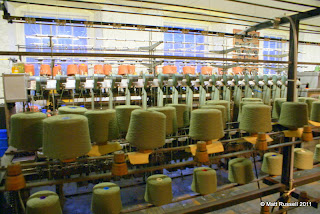 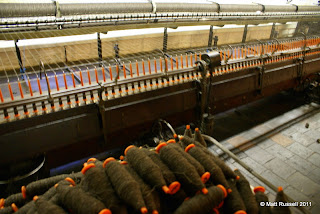 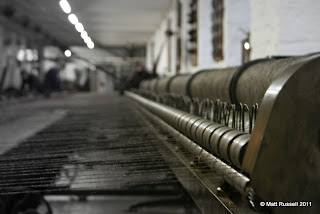 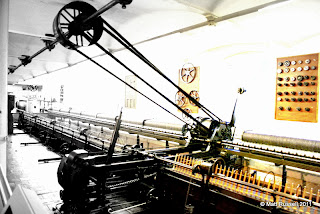 These cotton machines are forming cotton onto spools to be sold in various shops across the world, back when the mill was working back in the 1800's children would be used to collect the wool which fell from the machinery. 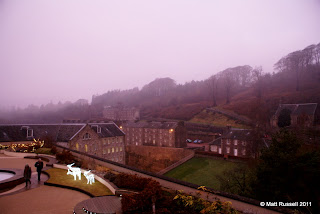 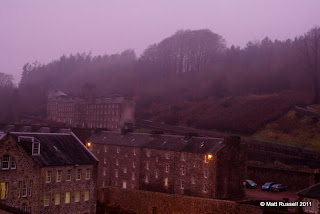 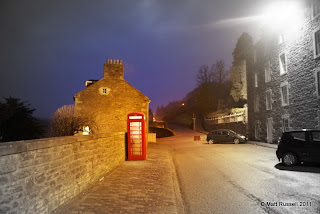 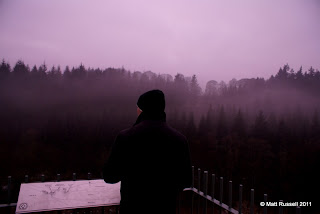 The River seen below is the River Clyde which is the primary  power system for the machinery used in the Mill and you can view the large water powered wheels powering the mill. 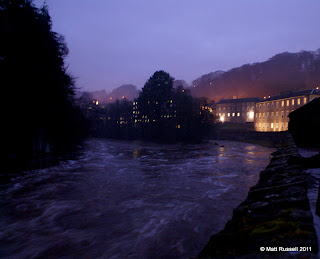 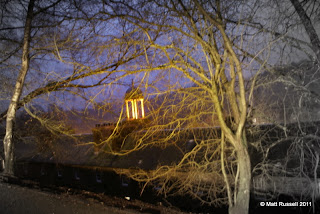 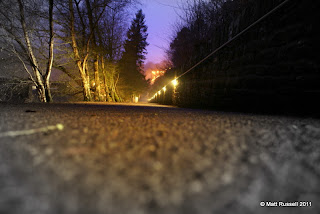 I would recommend a visit to you all if you get the chance! Not only is the Heritage centre extremal interesting it is such a beautiful Scottish location to visit.
Posted by arty_matt at 08:58 No comments: Glasgow's The Lighthouse was the location of Anne Ritchie's  presentation on Fashion and Textile Trends for the Spring/Summer 2012 season, Anne has worked in the textile and fashion industry since 1982 and has an extensive knowledge of both the global and the Scottish textile, fashion and accessory industry – from design and product development to market research and promotional activity.
The Trend Presentation highlighted the upcoming Textile Trends for the Spring/Summer 2012 season. The presentation included fashion, knitwear, accessories and interior trends 18mths in advance to assist design and product planning and helped me greatly.
The presentation was really useful for my work in that my colours, print, knit and weave can be aimed towards a much more commercial output and we received a useful book giving an insight into all the most exciting details. 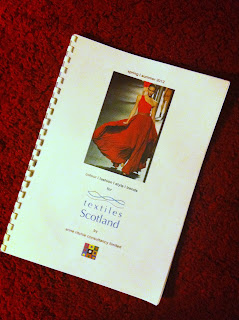 The presentation was also a great opportunity to network with other textile businesses and creative designers in Scotland and was a worthwhile visit.
Matt x

Shocked does not describe how I feel at the moment.... I cant believe it but I have been chosen to go and study in China in April for 3 weeks.!!

China, during my trip I will also be learning the language with over 40 hours of Mandarin lessons, the trip will also be packed with exciting and interesting activities. It is designed to give you a realistic experience of what life is like in China and to enable you to meet Chinese people. Previous programmes have included amongst other things: - Tai Chi, calligraphy and kite making classes, weekends away in Shanghai in a mountain village, work experience on an archaeological dig, Beijing Opera, amazing acrobatics shows and tea house/museum visits.

Jiangsu is one of China’s most economically vibrant
provinces, benefiting from significant foreign
investments such as Suzhou Industrial Park. Nanjing, as
the capital of Jiangsu province, is situated in the lower
Yangtze River.  Together with Shanghai and 14 other
cities, it forms the Yangtze River Delta Economic Zone.
It is one of China's most important historic cities along
with Beijing and Xian and was the capital of the
Republic of China till 1949.  Nanjing has also been a
national hub of education, research, transportation and
tourism throughout history. The population is over five
million.  The city still has the best kept city wall built by
the first emperor of Ming dynasty in 14th century

Nanjing High-street.
I'm so pleased that my application for the program has been such as success, and I can already imagine the influence this trip of a lifetime will impact my work and viewpoint on life.
Nanjing with its population of 5 million roughly the same as the population of Scotland will no doubt be a complete culture shock to me, however in my work I intend to focus on the way in which the East culture can perhaps be mixed with that of the west.
Excited and utterly nervous at the same time...Just imagine the photos and textiles resarch I will gather.
Posted by arty_matt at 04:27 1 comment: